So I got my new boarduino design in (with built-in USB!) and I have to test it so why not put it thru its paces with a BlinkM? Why not indeed!

Wiring it up to a boarduino is not as easy as simply plug&play as with an Arduino, so you’ll need a few wires. Still its very straightforward! But the real fun is programming it…upload the Arduino Communicator sketch and then run the blink Sequencer on your computer. Connect and then select which colors to display 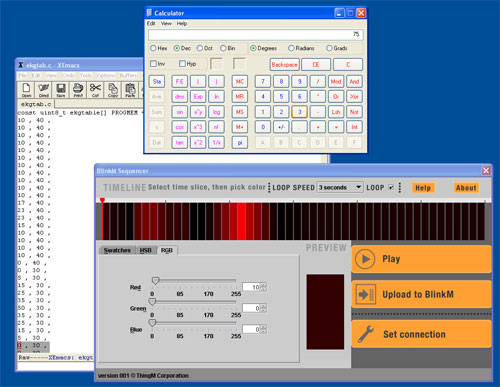 2 years ago when I worked on Duel Nature, I made a table of data that approximates a heartbeat. I couldnt quite duplicate it directly because the loop time is 3 seconds not 1 second, but I didn’t do too bad. Here it is in ‘autoplay’ mode with the heartbeat script. Sadly it doesnt seem like you can save the script to share it.

Add a coin cell, and you’ve got a ValenThrowieM (Valentine LED Throwie M)!

Next I wanted to experiment with talking to the BlinkM over i2c. I decided to make a little temperature display. When its cold, the LED turns blue, when its hot it turns red. For the sensor I simply used a LM34 which is super simple: just give it 5V and ground and the middle pin will be at +10mV/degF. So 68 degrees is 680mV.

I used a little heatshrink to protect the wires: Then wrote a sketch to tell the LED to change color, here it is at room temperature (65deg, its cold in here) Squeezing the sensor brings up the temp a bit, to maybe 85 degrees, a little pinker Then some icey water (its in a plastic bag to protect both the sensor and my drink!) and some hot tea The final analysis?
The BlinkM worked well and is a nifty little thing, the Sequencer software could be improved (can’t save scripts, cant adjust loopspeed, clicking on a ‘frame’ doesnt display the RGB value…) but its impressive that theres any software at all. It seems like the real control comes from sending it direct i2c commands, so one would have to write a custom Arduino sketch to make it do what you want. (Or, probably better yet, a python script that talks to the Arduino communicator since at least then you’re not uploading sketches) While its not the right thing for people who want to make 100-LED blinky projects (since its ~$12 each), its probably a good accessory for someone with an Arduino who just needs a few lights for a standalone project. I could see them being popular as integrated into wearables/fashion technology. They’re hella bright too!

ps. I’d like to see someone show how to control them directly using a motherboard i2c port such as the ones that have temp (and sometimes IR) sensors.