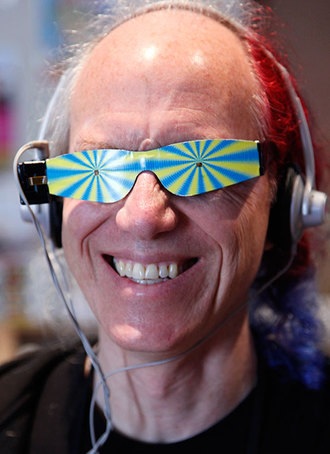 The creator of the TV-B-Gone, Mitch Altman, has turned his love of open-source electronic mayhem into a one-man business…

Many of his hacks, including the first versions of the TV-B-Gone, were built using the MiniPOV3 kit by hardware hacker Ladyada. That kit lets you create ghostly messages with a bank of 8 blinking LEDs, by waving the LEDs back and forth in the air.

By making changes to the kit’s circuitry, replacing the red LEDs with different colors and reprogramming the included microcontroller, Altman has made not only the TV-B-Gone, but also glowing lights that respond to hand gestures, an electronic “dog” that spins its tail in reaction to sunlight, a 3x3x3 cube of LEDs that displays abstract 3-dimensional patterns, and even a pair of glasses with embedded, flashing LEDs and a pair of headphones for getting your brain waves into a meditative state.

Altman is a fan of open-source hardware. The MiniPOV3 kit he uses is open source, and he recently released the schematics and code for his own projects as open source. Altman describes the decision to go open-source as a way of giving back to the hardware hacking community, which was already modifying and improving the TV-B-Gone.

“There are thousands of people who are incredibly intelligent and creative helping me, for free, and they love it,” he says, describing the benefits of open source hardware.

He’s also helped found a hacker space in San Francisco, Noisebridge, where hardware hackers (or those who would like to learn more about hardware and software) can gather to work on their projects.

“I make enough money to live the life I want to live,” Altman says. “And I love this life.”