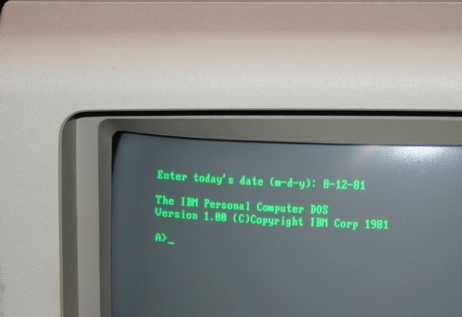 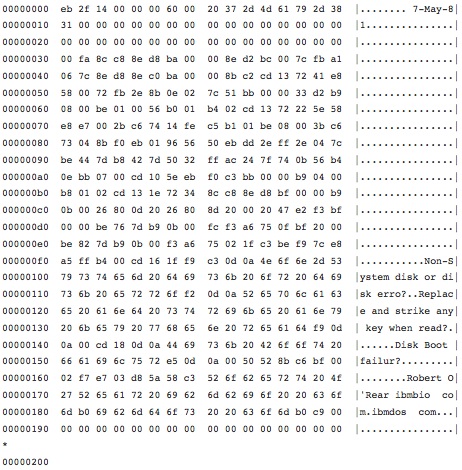 The bootsector of DOS 1.0 is celebtaring its 28th birthday today (it contains the timestamp “7-May-81″), so let’s look at it more closely.

DOS 1.0 shipped on a 160 KB single sided disk. The boot code in the IBM PC’s BIOS loaded the first sector into RAM at segment 0×0000, offset 0×7C00 and ran it. Later versions of BIOS checked for 0xAA55 in the last word of the bootsector, but the first version did not. Note that DOS 1.0 is also pre-BIOS Parameter Block, i.e. the bootsector does not contain any information about the physical layout of the disk, since there was only a single disk size.

What the boot sector is supposed to do is read “IBMBIO.COM” and “IBMDOS.COM” into RAM and run them – these are the DOS system files for machine abstraction and DOS API, respectively. In MS-DOS, they would be called “IO.SYS” and “MSDOS.SYS”.

But the DOS 1.0 bootsector takes quite a lot of shortcuts. It assumes it’s always a 40 track, 8 sectors single-sided disk and the two files occupy the first sectors of the data area contiguously – something that SYS.COM could guarantee when making a disk bootable.

So the bootsector first loads the first sector of the root directory (hardcoded to track 0, sector 4) and compares the first two entries with “IBMBIO.COM” and “IBMDOS.COM”. For some reason, the comparison is case-insensitive, although DOS only allows uppercase filenames.