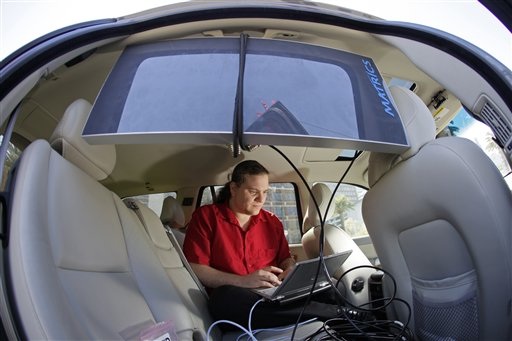 Climbing into his Volvo, outfitted with a Matrics antenna and a Motorola reader he’d bought on eBay for $190, Chris Paget cruised the streets of San Francisco with this objective: To read the identity cards of strangers, wirelessly, without ever leaving his car. It took him 20 minutes to strike hacker’s gold.

Zipping past Fisherman’s Wharf, his scanner downloaded to his laptop the unique serial numbers of two pedestrians’ electronic U.S. passport cards embedded with radio frequency identification, or RFID, tags. Within an hour, he’d “skimmed” four more of the new, microchipped PASS cards from a distance of 20 feet.

Increasingly, government officials are promoting the chipping of identity documents as a 21st century application of technology that will help speed border crossings, safeguard credentials against counterfeiters, and keep terrorists from sneaking into the country.
But Paget’s February experiment demonstrated something privacy advocates had feared for years: That RFID, coupled with other technologies, could make people trackable without their knowledge.

He filmed his heist, and soon his video went viral on the Web, intensifying a debate over a push by government, federal and state, to put tracking technologies in identity documents and over their potential to erode privacy.

Putting a traceable RFID in every pocket has the potential to make everybody a blip on someone’s radar screen, critics say, and to redefine Orwellian government snooping for the digital age.

“Little Brother,” some are already calling it — even though elements of the global surveillance web they warn against exist only on drawing boards, neither available nor approved for use.