How Netflix gets your movies to your mailbox so fast… 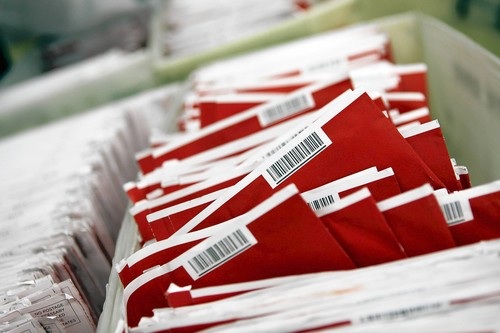 We ship a lot of packages (usually very fast), we are shipping geeks, we can tell you about endicia, dazzle, UPS, FedEx, scales, labels, bar code scanners… We love it – this article about Netflix is crazy.

Six nights a week, a truck leaves for the post office and picks up cartons full of these return-address envelopes; pickup is at 3 a.m. (It’s also the reason that the time of day you mail your DVD back has no effect on when you receive your next one.) Back at the 28,500-square-foot warehouse, from which more than 60,000 discs are shipped daily in the Chicago area alone, cartons are placed at the feet of employees, who glance in two directions — down (to pick up an envelope) and up (to look at the disc), and that’s about it. This is the first, and least automated, stage of the process, performed mainly by women, including a seemingly disproportionate number of local grandparents; they have full medical benefits and a 40-hour workweek.

They inspect each returned disc. They rip open each envelope, toss it, pull the disc from its sleeve, check that the title matches the sleeve, inspect the disc for cracks or scratches, inspect the sleeve for stains or marks, clean the disc with a quick circular motion on a towel pulled tight across a square block of wood, insert the disc into its sleeve, and file the disc in one of two bins. The bin to the right is for acceptable discs, the bin to the left is for damaged discs or discs not in the proper sleeve.

To a casual observer, this all seems to happen in a single motion, a flurry of fingers. Employees are expected to perform this a minimum of 650 times an hour. Also, customers stuff things into the envelopes. Scribbled movie reviews, complaints, pictures of dogs and kids. That needs sorting too. After 65 minutes of inspection, a bell rings. Everyone stands up.

From there, action shifts to long machines that go ffft. This, right here, is how you get discs as fast as you do. Inspected discs are scanned into the inventory by a machine that reads 30,000 bar codes an hour — ffft, ffft, ffft. The moment this machine reads the bar code, you receive an e-mail letting you know that your disc arrived. Then discs are scanned a second time — if a title is requested, and around 95 percent of titles get rented at least once every 90 days, the machine separates it and sorts it out by ZIP code. (The entire inventory of the building is run through this daily, a process that alerts other warehouses of the location of every one of the 89 million discs owned by Netflix.) After that, separated discs are taken to a machine called a Stuffer — which goes ssssht-click, ssssht-click — and stuffed in an envelope, which is sealed and labeled by a laser that goes zzzt.

After 5 p.m., trucks are loaded with cartons of mailers and return to the post office — indeed, Netflix has become the fastest-growing source of first-class mail for the Postal Service, a department official says.

The other day we were talking about how Amazon, NetFlix or eBay could have just bought DHL, but maybe they’re waiting to buy the post office.