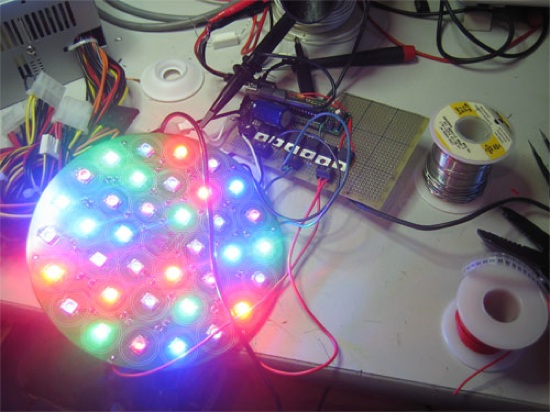 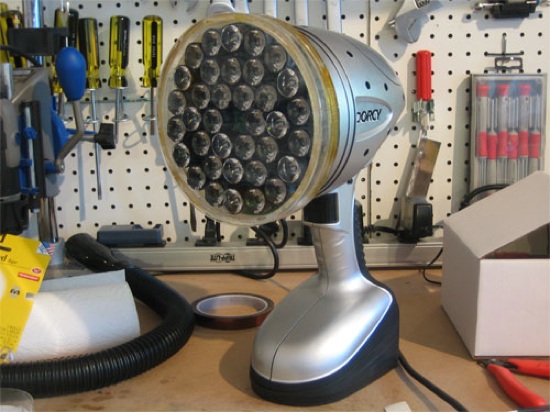 Our first open source Homeland Security non-lethal weapon project – The “Do-it-yourself Handheld LED-Based Incapacitator: THE BEDAZZLER”. After attending a conference where the $1million “sea-sick flashlight” (THE DAZZLER) was demoed by Homeland Security, we decided to create an under $250 version and here are the source code, schematics and PCB files! This is not a kit – but it is an Arduino project! – the M4V is here for the podcast folks…

Update: We’ve included a transcript of the video for the hearing impaired and well, we think all videos should have transcripts. For transcripts we used 3Play Media. We uploaded the video, they transcribed it, we paid via paypal, all under a week and under $30 for two videos total.

LADY ADA: Hi. I’m Lady Ada from Adafruit Industries, and I’m going to share with you some information about my latest project. But before I get into the technical details, I’d like you to watch this video. It’s from a conference I attended two years ago.

MALE SPEAKER: And I’m from Washington, and I’m here to help. You probably saw on YouTube, there’s a video going around, and it says don’t tase me, bro. Well, and non-lethal weapons are really pretty critically important. And so, what I have with me is a dazzler. So, the dazzler is a seasickness machine. And what it does, it uses LEDs, and it’s a random generator and it affects your equilibrium.

I’m not going to point it at you, I was with a group of GE executives yesterday and I held it up like this, and just the reflection made them nauseous. We’re trying to change from don’t tase me, bro, to daz me, bro. And that’s it. Let me know when you’re feeling bad. Anyway, thank you so much.

LADY ADA: So we decided to look online to find out more information. And we ended up finding some news stories.

REPORTER: And tonight Homeland Security has spent close to a million dollars on a flashlight that can stop you in your tracks. Even law enforcement says it is going to be controversial. We wanted to see just how effective the light is.

OK, that’s a lot brighter. Those blotches in my vision stayed with me for about a half hour after the test. And then a strong headache kicked in. It’s still a little blinding.

LADY ADA: Like most government projects, the Dazzler was actually invented and developed by an outside consulting firm. So we looked up some information about this firm. Found the patent, and looked up exactly what it is that they did. The portable flashlight flashes green LEDs about ten hertz. This causes flash blindness, startling, disorientation, vertigo, and occasional vomiting. We thought, we could probably do that for under a million dollars. So we put together this project for about $250 and are publishing all the information. So that you can build one of these at home.

SECOND FEMALE: Here is the project enclosure. So I re-used a flashlight that I got from Sears. So this is the head, which holds the LEDs, the electronics inside. This push-button is how we activate it. It’s not turned on right now. And here is a lead-acid battery that provides power. Up here, we have 36 LEDs. Each one has a lens that focuses the optics. So I’m going to remove just the lens, and you can see that there’s a basic heat sink with the fan on the back, to help with a little heat sinking.

Here we have the circuit board. We have six driver frets, two for each color, red, green and blue. We have a Arduino clone here, which I use to basically do the pulse with modulation, the randomization and mode selection. And there’s a wire that travels down the body to the battery. Then behind here, you can remove this plate. There’s a 9-volt battery that powers just the Arduino, it’s a separate power supply to avoid noise that comes from the pulse with modulation. Reprogramming header for updating the firmware, and a mode button which lets me change what kind of display it is.

FEMALE SPEAKER: Want to make one yourself? Well, we’ve got the schematics, source code and circuit board layouts all available online at ladyada.net/make/bedazzler. You may be wondering, does it really work?

MALE:: My eyes. The goggles.They do nothing.

LADY ADA: Well, turns out it doesn’t work that well. But it is great for raves.