“Energy use information drives meaningful behavior change” – we agree! Google announced today that they have their first device partner (TED) that can publish your power usage to Google’s PowerMeter.

We made our Tweet-a-watt completely open, thousands of folks are using them (you can see many on Twitter and in many Google app engine examples)… 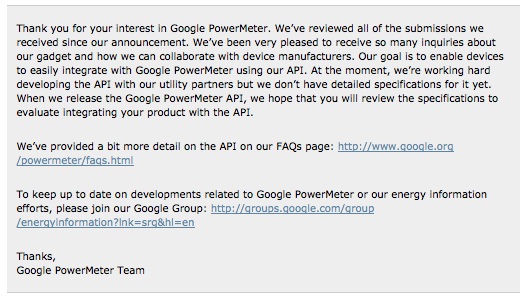 We also sent Google a request using their form for “device partners” but we only got an auto-reply back.

Eventually we posted about this on our site and a Google engineer commented.

In early 2009, a month after we released the Tweet-a-watt, Google announced their “PowerMeter” and now almost a year later they have their first device partner, we’re a little bummed that Google *could have* had thousands of Tweet-a-watt customers using the Google PowerMeter all this time but for whatever reason will not?