Round cable stripper – do you use this? 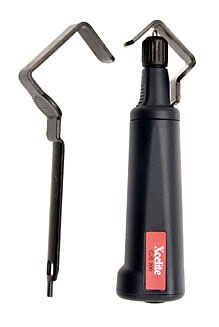 We’ve seen the wire stripping technique used by broke students and hobbyists, but some industry ‘vets’ complained. We found it interesting that nearly everyone had a -different- way of doing it (slice down with razor, cut down with dykes, cut with razor then bend, pull on insulation and /then/ cut down, pull on the internal cord, use a $300 thermal wire stripper…) but nobody pointed out thats there are $30-$50 tools designed just for this purpose. (We thought the best you could do was an autostripper for $100)

We like Cooper tools and the color black so here’s one example. They look rather nice, but never seen them in on a workbench or lab… is there any reason nobody uses them? I mean, spiral cutting how cool is that?

Filed under: random, tools — by adafruit