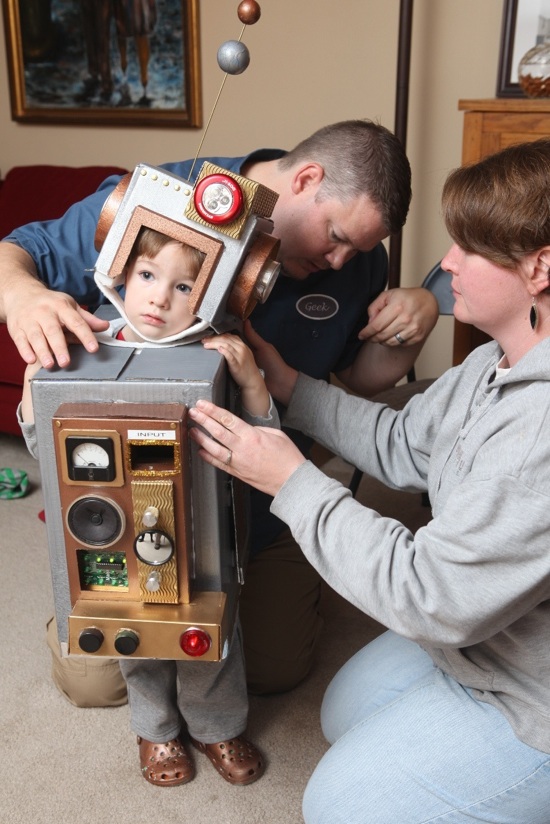 My wife and I are making a robot Halloween costume and I just finished the electronics design prototype. I wanted to wait until the costume was finished before revealing it but I’m too excited that I finished my circuit and coding. That’s a video of it, and I want to describe it a little. It uses an Adafruit Wave Shield for the sounds, and an antique analog gauge I found at Gateway Electronics here in St. Louis. There’s an infrared beam pair from Sparkfun, which will be watching the “candy input slot” on the robot’s chest. The gauge displays the count, until too much candy is inserted and it goes crazy. Then after 20 seconds of no more candy, the candy count gets reset, to be ready to do it all over again at the next house. In the sketch, I used these AlphaBeta libraries: LED, button, TimedAction, and Scheduler. These made coding this sketch very easy. He even updated Scheduler with a clear() for me. Thanks again for that! The hardest part was getting it all to work together. I had been trying to use pin 9 for the gauge, and it crashed the sketch. I did more reading and found out you can’t do PWM on 9 with the Wave libraries because of the timer. Pin 6 works fine though. The beep sound loop I found on my mac, I think it came from iMovie. The speech is recorded synthesis also from my mac, made like this from a terminal: say -o outputfile.aiff “thing to say” This makes an aiff file. Then I used iTunes to convert all the sound files to WAV with the right settings for the Wave Shield. The chaser LEDs are going to surround the Arduino in a shadow box sort of thing, so people can see the controller, and to punch it up so it isn’t so boring. ;D

Detail shots of the electronic components in the robot costume my wife and I built. She did all the painting and papercraft, and I did the electronics. Systems include an Arduino with Adafruit Wave Shield for sound effects, and a proto shield that you see with all the wires and resistors. They are wired to the antique analog gauge on the front panel, which reacts to the IR pair from SparkFun in the Input slot. The speech is recorded synthesis from my Mac. Sayings are: “Candy, my favorite fuel,” “Yum yum yum…,” “You will be spared from the robot uprising, thank you human,” and “Warning! Candy overload!” And on the front panel just for eye candy is a Game of Life kit from the Maker Shed/Adafruit.