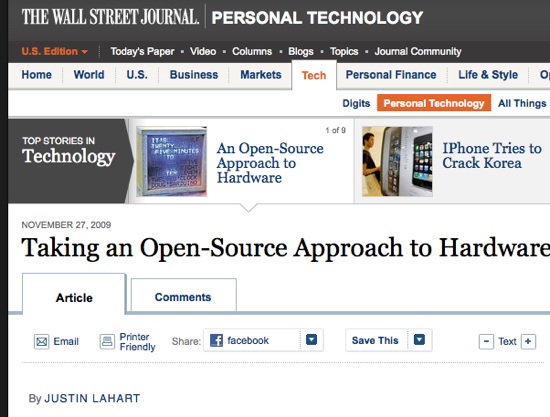 Here it is folks, open source hardware in the WSJ! Taking an Open-Source Approach to Hardware @ WSJ.com…

The main producer of the Arduino is Smart Projects Snc, based in the tiny town of Scarmagno, Italy. This year, the two-person firm is on track to sell at least 60,000 of the microcontrollers, which retail for at least $30 a piece, up from 34,000 last year. Owner Gianluca Martino, an electrical engineer, has had to contract out much of the production to keep up with growth.
It’s a peculiar predicament, since the Arduino’s designs are on the Internet for anyone to download and use.While there are clones on the market, the microcontrollers that Mr. Martino produces, with the map of Italy printed on the back of it, are by far the most popular.

Comments Off on Taking an Open-Source Approach to Hardware @ WSJ.com