Holy smokes! Parallax is opening up a bit! CC schematic of propeller-based oscilloscope 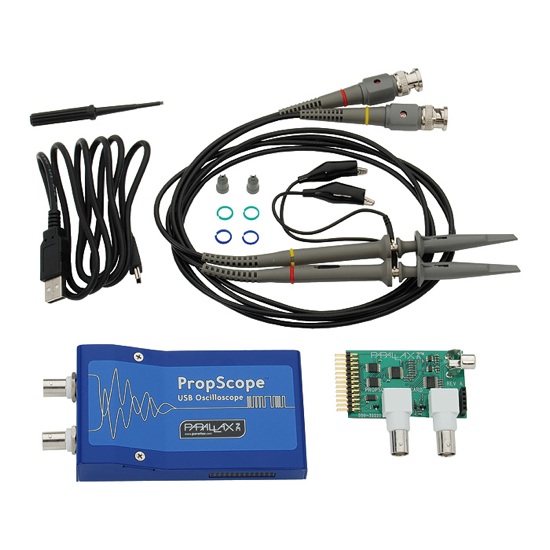 We’ve hoped for a long time that Parallax would consider opening up a bit more – publishing schematics, some open source software here and there, you know – throw us an open bone. It appears the wait is over and Parallax is starting to put some things out there… Here’s a schematic for their “PropScope” – it’s creative commons (but the top left is a little weird, likely a template?)…

The PropScope is a two-channel oscilloscope that is capable of reading 25 million samples per second with ten bits of resolution over one, two, ten, or twenty volt peak-to-peak waveforms. Power is provided through the USB port requiring only a single cable to connect the PropScope to any laptop or desktop PC. A built-in expansion port allows additional capabilities and upgrades, by simply plugging in an expansion card. A PropScope DAC card is even included, providing an analog trigger, a four-bit digital trigger, an eight-bit digital to analog converter, and a four-bit NTSC/PAL output. Other cards will be available to add even more useful features. The included software provides a traditional scope interface along with auto measurements and the ability to store and export waveforms. The software also provides features not normally available in a stand-alone oscilloscope, including a function generator, a logic analyzer, a spectrum analyzer, a vector-scope, and more.

Great start, anyone from Parallax want to chime in to talk about what’s going on? You folks are so close! Release the firmware too!