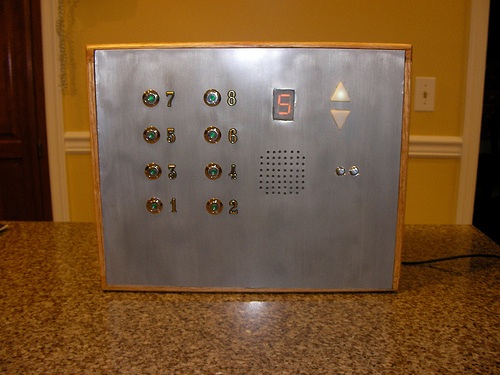 I’ve recently completed a device that I’ve been idly threatening to make for years. This is a device that has no purpose other than entertainment, and it’s fairly limited in that regard too. It was fun building it, and it was a great arduino and electronics learning project for me.

For years my kids have argued over which one of them gets to push the buttons on the elevator control panels in malls and hotels that we would go to. The inside buttons are much more desireable to push than the outside call buttons and thus it would lead to debate outside the elevator and the inevitable delays involved in figuring things out. Since this provided so much entertainment for them, I’ve been threatening for years to just build a box with buttons that light up. When I finally got around to carrying it out, things got way out of hand and I wound up just building the entire elevator panel.