The ITP winter show 2009 (a two day exhibition of interactive projects, sound and physical computing at NYU’s Interactive Telecommunications Program Tisch School of the Arts) is always a joy to visit (see MAKE’s coverage from earlier in the week). Each year we visit the show and try to pick out a few favorites, it’s always a challenge since there are usually quite a bit. That said, here are five interesting projects from this year’s show. The video above will give you a quick taste of what the show is all about too! And here are a bunch of photos. This post will also appear on MAKE later today… 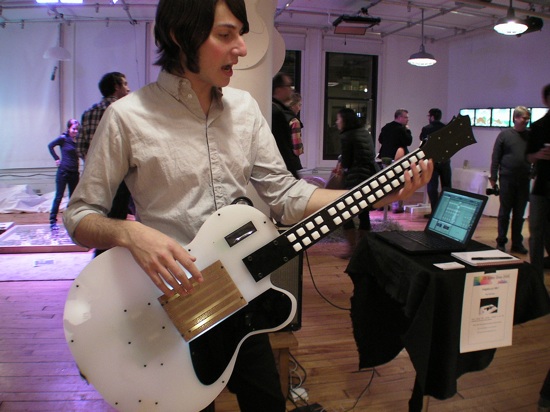 fridgebuzzz MK1 – Guitar inspired MIDI controller consisting of 32 LED pushbuttons and 6 touch plate switches. The MK1 prototype is a user programmable MIDI controller featuring 32 LED pushbutton switches and 6 touch sensitive copper plate switches. An example user mapping would have the top row of twelve buttons be designated as major chords arranged in the cirle of fifths. The row below has minor chords arranged as the relative minor to the major chords. The touch sensitive switches, arranged as if they were strings on a guitar, trigger notes based on which chord button is pressed. The eight buttons located higher on the neck play a major or minor scale in the key of the last chord button that was pressed. The headstock contains six LEDs that flash when the corresponding touch plate is activated. Paul Rothman. 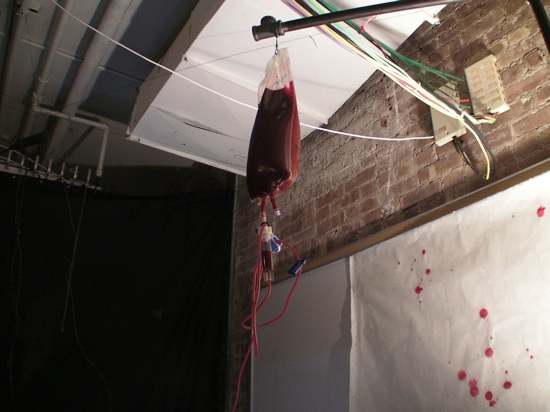 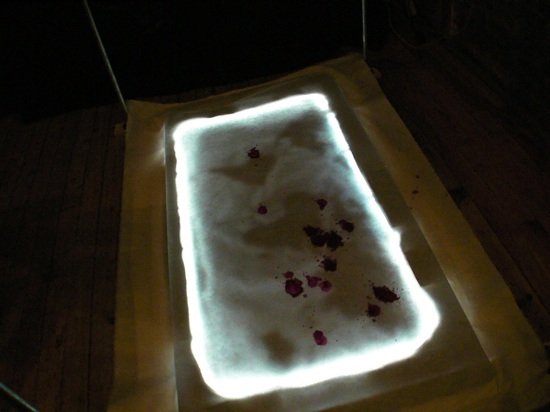 The Bed. A physical visualization of conflicts. The machine reads daily data from news organizations, and detects conflicts using semantics. The location of the news is then translated from Latitude Longitude to xy, and the plotters head drips paint on the translated location. Igal Nassima. 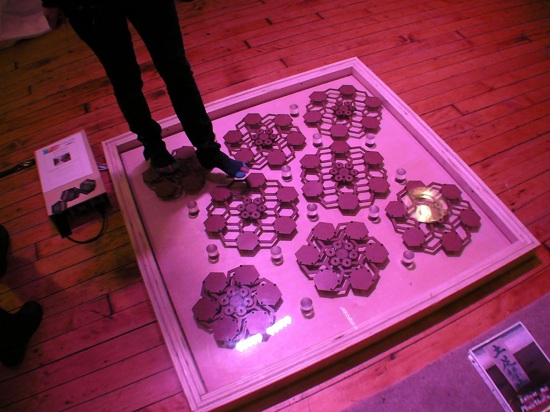 Dynamic Ground. Step on the platform and see how the units below your feet magically come to life… The Dynamic Ground is a responsive, kinetic floor constructed from deployable units. When passersby step on the platform, the tiles shift between a contracted state to an expanded state. Each unit is constructed from 7 interconnected hexagons that move in a continues circular movement, driven by one central servo motor, which is activated by a light sensor. Adam Lassy, Adi Marom. 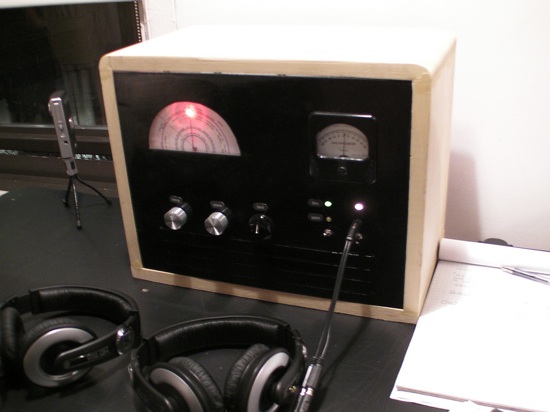 Historical Radio. A radio which moves the listener through time and space. The historical radio uses a familiar interface to navigate through historical radio broadcasts from multiple genres of music and news. The tracks are curated to provide an educational experience, highlighting events across time (move through time) or across the world and genres at the same time (move through space). This device would fit in at a history museum, and is designed to be understandable and usable by anone who has ever used a radio: turn the tuning knob to move through time, turn the band selector switch to move through space. By selecting an automatic mode, the curation will take the listener along a path across time or space. David MIller, Jason Aston, Lucas Werthein. 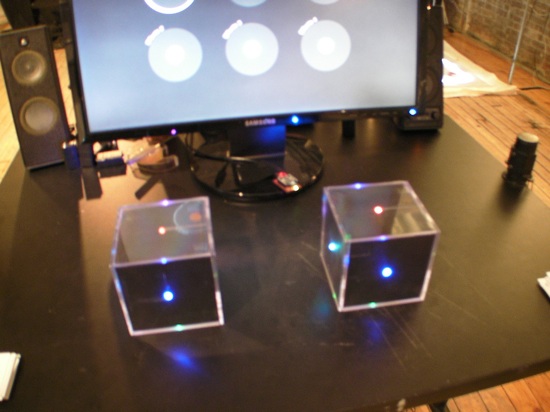 Super Duper Cubes. A tangible interface to control music and video through midi, using a set of illuminated cubes. Super Duber Cubes are a tangible interface built to control music, games or visualizations. Each cube has a 3-axis gyroscope, a 3-axis accelerometer, plus wireless communication and built-in battery. This allows the user to turn and rotate the cubes without any wires attached. In one setup the user can change musical instruments by turning the left cube. By turning the right cube, the user can select between several parameters in the selected instrument. By rotating the left cube, the user can manipulate these parameters, e.g. turning down the volume, applying distortion or adding delay to the instrument. Nikolas Psaroudakis, Rune Madsen.

Filed under: arduino, art — by adafruit