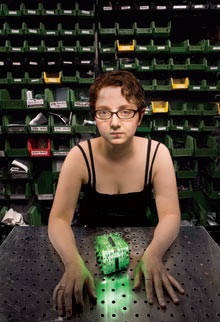 What’s behind the name of her company, adafruit? What follows is my conjecture. Way back in the dark ages there was a object-oriented  programming language named Pascal which was also one of the first programming languages compiled for the  Apple II computer. My youngest son Jason and I bought it for $525 (ouch!). It was, in due course, followed by a  programming language named Ada. Seems that the name Ada (Lovelace) is revered by Geeks. “In 1953, over one hundred years after her death, Lovelace’s notes on Babbage’s Analytical Engine were republished. The engine has now been recognized as an early model for a computer and Lovelace’s notes as a description of a computer and software.” [Quote from  here and much more on Ada’s history.] In short, her notes include (Section G), in complete detail, a method for calculating a sequence of  Bernoulli numbers with the Engine, which would have run correctly had the Analytical Engine ever been built. Based on this work, Lovelace is now widely credited with being the first  computer programmer and her method is recognized as the world’s first  computer program. So we take “ada” + “fruit” and we have a name along the lines of  bearing fruit from Ada’s original work some 160 years ago. That ought to be geeky enough for the most uber geek out there. Hat’s off to Ms Fried and all the giants upon whose shoulders we attempt to stand on.

Good guesses! For now, you can watch our about videos…