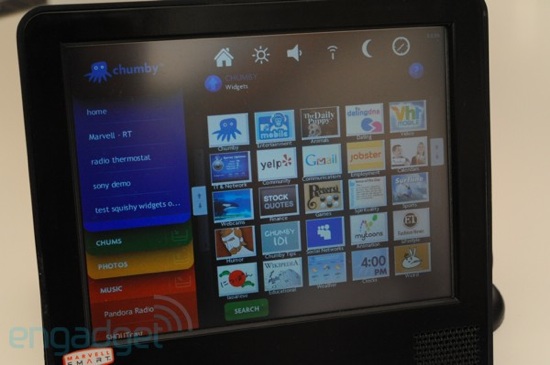 Even though they don’t make retail devices, the booths of component makers like Qualcomm, Broadcom, TI, and Marvell at trade shows are often great venues for actually seeing retail devices — these guys have to help showgoers make the connection between a boring chunk of silicon and an end product if they’re hoping to score orders, after all. Indeed, Marvell’s tent at MWC this year is a veritable cornucopia of Good Things, and we couldn’t help but notice that they’re showing what appears to be one of Chumby’s not-for-sale reference designs sporting an 800 x 600 display with an 800MHz Marvell Armada core (hence the appearance here in the booth). For the record, we’re told this is a successor to last year’s reference platform known as “Silvermoon” that had been running on a 1GHz PXA168 and that there’s a chance it’ll be available in retail form later this year. The UI’s attractive, but not really as multi-functional as Sony’s Dash — you can think of this as more of a giant Chumby One, really, with some extra screen elements designed to take advantage of the significantly higher resolution. There’s no guarantee this’ll ever be produced — or if so, when — so for the time being, our video UI tour after the break is about as close as you’re going to get.

But wait, there’s more! The Chumby guts (software guts that is) seem to be on a new Sony device… 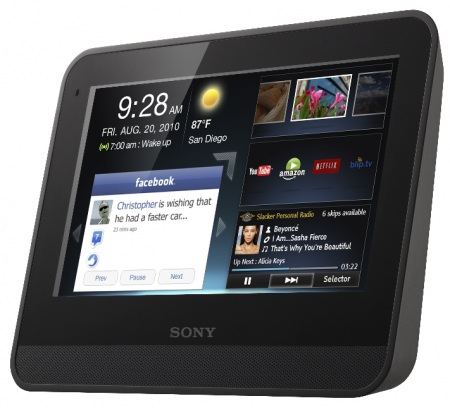 Surprising attendees of CES 2010, Sony has dropped a $199 7″ color touchscreen device named “Dash” that is destined for the market in April. We originally spotted the Dash in a FCC filing referencing a HID-C10 model number in mid-December. It has built-in Wi-Fi, and an internal accelerometer which supports vertical flip, allowing for two optional viewing angles: upright, ideal for a table or nightstand; and tilted, perfect for a countertop. It also supports multiple user profiles and channels, allowing several members of the household to create and maintain their own customized view of the Internet. Did we mention free instant access to over 1,500 apps from chumby industries, inc, including popular social networking, news, weather, sports, live traffic feeds, and more? Sony has also integrated access to audio and video content from Sony’s Bravia Internet video platform, including YouTube, Pandora Internet radio, Epicurious, Crackle, Livestrong, Blip.tv, and many others.

Our prediction, Sony is not going to do “open source hardware” – they’re going to use all the software bits only for the Chumby, Flash stuff, server stuff, app stuff – but Sony is not and will not do OSH, ever. Sony, home of the: Memory stick duo pro plus extreme UMD format – they’re not going to do OSH folks, sorry 🙁