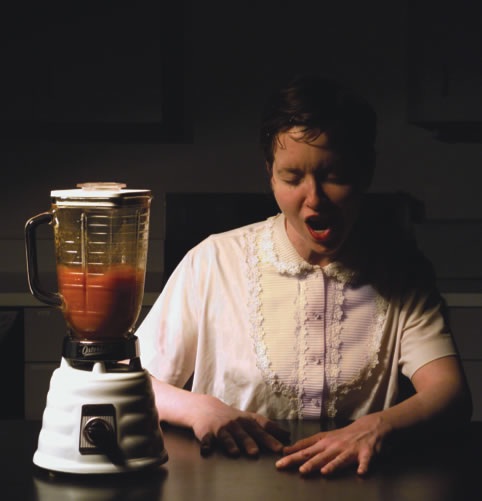 Each hour we are featuring a woman we admire who is currently doing amazing work right in the tech/maker/art/science space. Woman of the hour, Kelly Dobson.

Kelly Dobson, Cambridge, Massachusetts. Getting the blenders to know when you’re talking to them is no mean feat. Dobson programmed algorithms in C++ into 1GHz VIA Epia microprocessors mounted inside each blender, and to get them to work, she imitates the blenders with low, guttural motor sounds. “You have to make sure you have the roughness of a blender, so you might get him started with a rrrrrRRRRRRR,” says Dobson. When she raises the tone, they speed up. Friends have given her the nickname Monster.

Long before implants, splicing, and cyborgs, people and machines co-evolved as companion species. Critical infoldings happen in the connections between people and machines, and my work in Machine Therapy investigates these engagements. The machines (some made by me, some found) have expressive engaging behaviors, strength of character, negotiative egos and neurotic propensities.