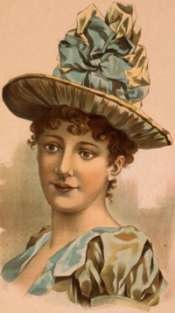 Today in History – May 5, 1809 – Mary Kies is the first woman to receive a U.S. patent. Prior to the U.S. Patent Act of 1790, only men could author a patent. Even after the federal law was passed, women couldn’t patent as most states did not allow women to legally own property. For example, there is much speculation that the authorship of the cotton gin patent of 1794 should have included Catherine Greene on the patent, as well as that of the African American slaves who also were not allowed to patent.

Mary Kies’ invention was a process for weaving straw with silk or thread. Alas the patent file was destroyed in the great Patent Office fire in 1836 and an exact copy of the patent is no longer available. Kies invention has been credited for boosting the U.S. hat industry. Even First Lady, Dolley Madison praised her contributions. Until about 1840, most of the other 20 patents issued to women concerned applications that women saw in their everyday work: apparel, tools, cook stoves, and fire places.

Comments Off on May 1809 – Mary Kies, first woman to receive U.S. patent