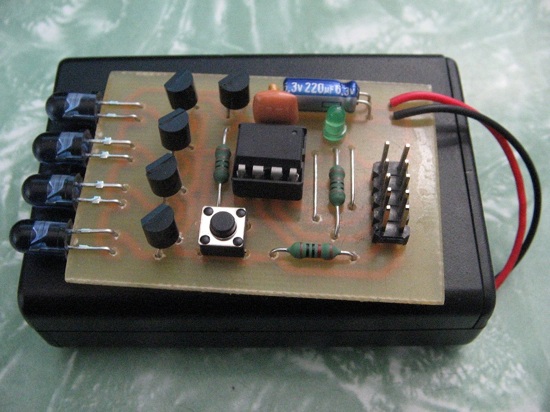 Fun in the forums, Agent24 writes…

I’ve been working on making a TV-B-Gone for a while now, and it’s finally done!

I used the same design as the Adafruit version but with my own PCB (single layer design done in KiCAD – because a double-sided board would cause unnecessary difficulty for me) Managed it with only 2 wire links, don’t know if it’s possible to make it without these and keep the size down.

The only real change is that the programming header goes back to the 10-pin version. I had already built myself a PPPPD which does not have a 6-pin interface, so I had to change the TV-B-Gone. Also since the programmer uses power from the target board, I had to power the whole thing from 5v out of the USB port. (Just with the NiMHs wasn’t enough to get the programmer working, and the ATTiny was not detected). I also used different IR LEDs (Vishay TSAL5100 and TSAL6200)

So far I have not done a full test but it seems fine. I can turn my own TV on and off and flood my webcam with IR light, so everything appears to be working

Thanks to Adafruit industries for making this design open source! I’ll be adding my own board design files if anyone wants them (once I clean them up and fix the transistor orientation – they were backwards!)

Filed under: tvbgone — by adafruit

Comments Off on Homemade TV-B-Gone…