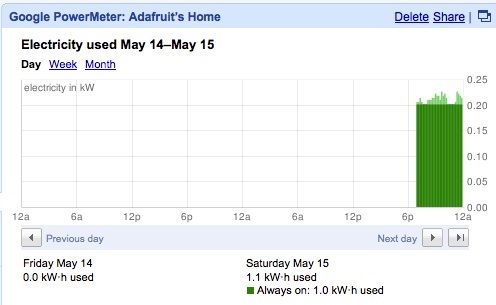 Breaking news! Tweet-a-Watt now works with Google Powermeter! and all the code is up on github. Once you have the Tweet-a-Watt working with the python scripts we provide, you can add a cool extension and have beautiful graphs generated thanks to Google Powermeter! This code, based on the original Tweet-a-watt, was created by the super-rad Devlin Thyne as special project with Adafruit (you can get a kit here).

You can download it from our source repository on github which now includes this script Please note that this mod is new, and is still under development, if you are having difficulties, try posting to the forums. Right now its only tested to work with a single Tweet-a-watt.

Google did release an API a few weeks ago, so this how it’s all working. Unfortunately, Google ignored our requests for access, choosing only to work with commercial partners and not the hundreds (perhaps thousands) of Tweet-a-watt makers out there, we’re excited that anyone can now build their own power meter and have it work with Google Powermeter now. Hopefully someone from Google will read this and consider adding Tweet-a-watt as an official option (besides AlertMe, UK and TED, Energy Detective, US). We’re open source, we’re power metering that works, we’re a good option for many people who wish to share their power usage.

For those interested in all things “net connected power meter” related, here’s a brief history on the Tweet-a-watt and what we’ve been up to. You can see all of these via our Tweet-a-watt blog category too.

Comments Off on Tweet-a-Watt now works with Google Powermeter!