Synthetic Bacteria Has Secret Messages Coded in its DNA 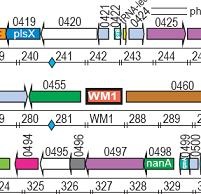 It’s not a question of, just when, we’ll have a Synthetic Bacteria kit…

Researchers at the J Craig Venter Institute recently unveiled their first self-replicating synthetic bacteria (M. mycoides JCVI-syn1.0) whose DNA was ‘programmed’ base pair by base pair. To verify that they had synthesized a new organism and not assembled the DNA from another natural bacteria, scientists encoded a series of ‘watermarks’ into the genes of M. mycoides JCVI-syn1.0. There are four of these hidden messages: an explanation of the coding system used, a URL address for those who crack the code to go visit, a list of 46 authors and contributors, and a series of famous quotes. The presence of these watermarks verifies that M. mycoides JCVI-syn1.0 truly is synthetic and demonstrates the precision and power of JCVI’s new techniques in synthetic biology.