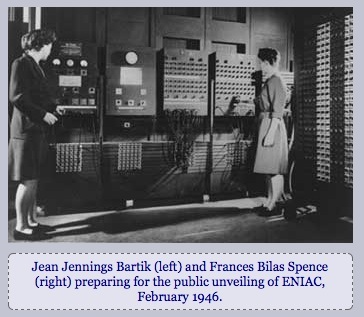 At 83, Betty Jean Jennings Bartik — a devoted bridge player and grandmother of five — had a secret past that was invisible to many who knew her. Her grandson Alex knew her story. He stormed out of school one day when his teacher refused to believe his gray-haired granny was a computer pioneer who had calculated firing tables and ballistic trajectories during World War II. The boy’s parents had to explain to the teacher that Bartik and five other women had, indeed, legally hacked the world’s first programmable computer, converting it into a stored machine and eventually helping to usher in the digital age. “She was dumbfounded,” said Bartik.

So, too, were the historians, who for a half century never acknowledged the wartime contributions of the six women who programmed the Electronic Numerical Integrator and Computer (ENIAC) and made programming easier and more accessible to those who followed. In 1945, Bartik was one of a handful of female math majors at what was then Northwest Missouri State Teachers College. The feisty 20-year-old farm girl knew only one thing: She didn’t want to teach. As the war came to a close, the Army had run out of male mathematicians. Bartik answered a recruitment ad for women “computers” in a classified project at the Aberdeen Proving Ground operations at the University of Pennsylvania. “I wanted to do something exciting and adventuresome,” she told ABCNEWS.com. “I wanted to get to the big city and see what life was like.”

More:
Invisible Computers: The Untold Story of the ENIAC Programmers.