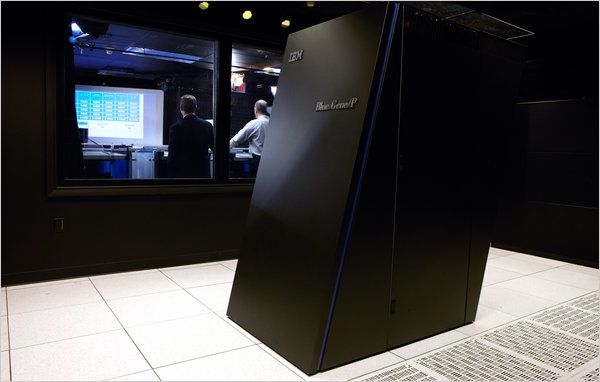 With Watson, I.B.M. claims it has cracked the problem — and aims to prove as much on national TV. The producers of “Jeopardy!” have agreed to pit Watson against some of the game’s best former players as early as this fall. To test Watson’s capabilities against actual humans, I.B.M.’s scientists began holding live matches last winter. They mocked up a conference room to resemble the actual “Jeopardy!” set, including buzzers and stations for the human contestants, brought in former contestants from the show and even hired a host for the occasion: Todd Alan Crain, who plays a newscaster on the satirical Onion News Network.

I.B.M built a chess computer (Deep Blue, 1997) that beat Kasparov – but it wasn’t without drama…

After the loss, Kasparov said that he sometimes saw deep intelligence and creativity in the machine’s moves, suggesting that during the second game, human chess players had intervened on behalf of the machine, which would be a violation of the rules. IBM denied that it cheated, saying the only human intervention occurred between games. The rules provided for the developers to modify the program between games, an opportunity they said they used to shore up weaknesses in the computer’s play that were revealed during the course of the match. This allowed the computer to avoid a trap in the final game that it had fallen for twice before. Kasparov requested printouts of the machine’s log files but IBM refused, although the company later published the logs on the Internet. Kasparov demanded a rematch, but IBM refused and dismantled Deep Blue/ Owing to an insufficient sample of games between Deep Blue and officially rated chess players, a chess rating for Deep Blue was not established.

We still think that IBM should open source Deep Blue.