Why Arduino is a Hit With Hardware Hackers 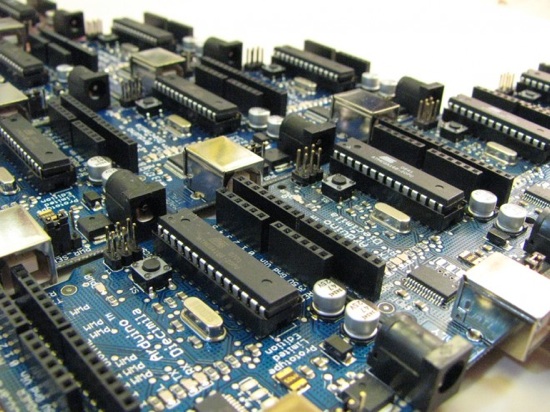 Why Arduino is a Hit With Hardware Hackers @ Wired.com

For electronics hobbyists, an open source chipset like a BeagleBoard that packs as much punch as a smartphone processor might seem like the key to paradise. Yet it is the relatively underpowered 8-bit microcontroller Arduino that has captured the attention of DIYers.

Arduino began as a project in Italy in 2005 and since then has turned into an open source hardware movement. There are thousands of Arduino projects today such as electric meters, guitar amplifiers and Arduino-based gadgets that can tell you when your plants need water.

The Arduino community is at least 100,000 users strong.  But it is not alone.

Other open source projects like the BeagleBoard, which is shepherded by Texas Instruments, are trying to win Arduino fans over.

The Beagleboard is a low-power, single-board computer, whose latest version is based on the same 1-GHz ARM Cortex A8 processor that drives the most sophisticated smartphones today. That gives it far more processing power than the the Arduino. Yet the BeagleBoard hasn’t hit the same kind of chord with hardware hackers that the Arduino has.

“The BeagleBoard is not for a novice,” says Phil Torrone, senior editor at Make magazine and creative director at Adafruit, a company that sells DIY electronics and kits. “With an Arduino you can get an LED light blinking in minutes.”

Fundamentally, BeagleBoard and Arduino are two different systems: The former is a single-board computer, while the Arduino is just an  8-bit microcontroller. The BeagleBoard-xM includes a 1 GHz processor, on-board Ethernet, five USB 2.0 ports and 512 MB of memory.

What they do have in common is that both represent possibilities: the potential to use your technical and creative skills to make a concept come alive.

And just to elaborate – we love the Beagleboard project and while it’s fun to compare it to an Arduino, it’s very different and for a very different type of electronics enthusiast, or perhaps – the same one on different places on the electronic journey time line.