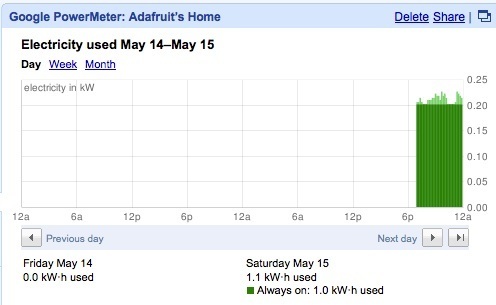 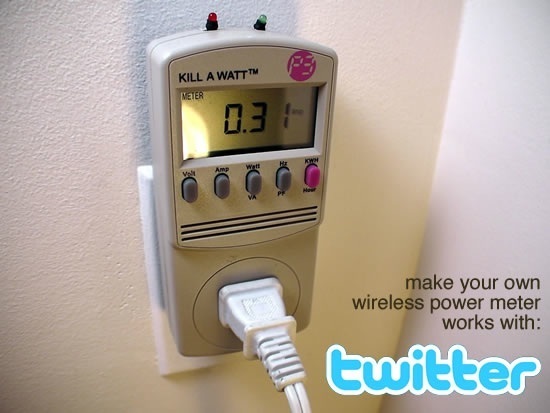 Ok this is for the power geek folks, a quick recap – back in May we showed you how to get the Tweet-a-Watt working with Google PowerMeter. It’s working but it’s not “official”.

All the code is up on github. Once you have the Tweet-a-Watt working with the python scripts we provide, you can add a cool extension and have beautiful graphs generated thanks to Google Powermeter. We thought we were done, but not quite.

Later that month we tried to get the Tweet-a-Watt “officially” added to the Google PowerMeter page here or here (we met the Rus Heywood from Google at Maker Faire, he directed us to Steve Hines and Rolf Schreiber).

It seems there is another hoop to jump through and at this point we’re going to suggest that the interested makers help out. Here’s the note from Steve Hines, a Developer Programs Engineer at Google, working with the PowerMeter team:

The enrollment process for Powermeter has a mechanism that allows the automation of this step of the process. It requires that the enrollment request come with a URL is called after enrollment. The handler at this URL can store the required token and path automatically.

One potential solution would be to have your python code extended to create a listener running on the user’s local machine at localhost would receive this request. The listener could then parse the request, taking out the token and path and storing them in environment variables. The python API scripts you ship would then use these environment variables rather require the user to edit the scripts and manually add them.

You can review the complete Tweet-a-Watt timeline here. If anyone wants to help with this last bit let us know.

At this point, and just our opinion, we’re not really sure PowerMeter is a serious effort at Google and if it will continue, the manager (Ed Lu) recently left, the forums are pretty low volume on the Google site and if you review the Tweet-a-Watt time line it’s not that encouraging for folks wanting to use Google PowerMeter. The folks from Google have posted here before and we’re hoping they re-consider how they’re deploying PowerMeters and what the goal of the project really is, previously Google’s Ed Lu said…

“We are not trying to build a business model around it,” he said at VentureBeat’s GreenBeat conference last year. PowerMeter was part of Google.org, he noted, the company’s philanthropic arm.

We think ultimately Google will need to become a power company to meet it’s computational & storage demands, investing in a variety of power projects makes sense. The makers, tinkerers and students of today out there who use our power, solar and energy tracking kits are key to our future and Google’s future too. Google has the top minds in the world, we think the PowerMeter project should get a bit more love.

So with all this being said we’re hoping Google makes it a little easier for anyone to get any power meter to work with Google PowerMeter, specifically the hundreds (maybe thousands) of Tweet-a-Watt builders. The shifting priorities and management on Google PowerMeter likely makes it hard for the team doing to the work to get things done and the needs of the power metering makers are not likely a priority.

A lot of power start up buy our Tweet-a-watt to do prototyping and to later attract funding, our kit quickly allows them to do all the things they’d like to do later, then they can go to manufacturing, the last bit they ask about is the graphing and sometimes how it could work (easier) with Google PowerMeter.

From what we understand since Google is involved, even if it’s not in a major way in the “power industry” now, people in that space either worry about it, embrace it, want to work with them, compete or all of those. A lot of it is war-of-the-press-releases, but some of the concern may be valid – there’s also a lot of opportunity. 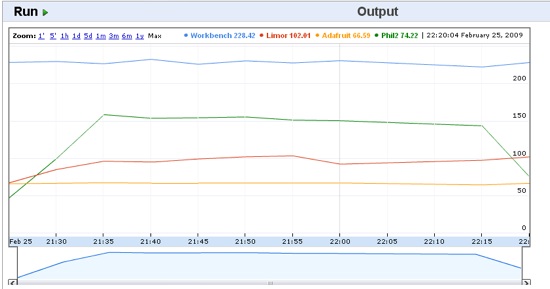 Regardless, if you want to start doing cool stuff with power metering and graphic, here’s what you can do immediately: