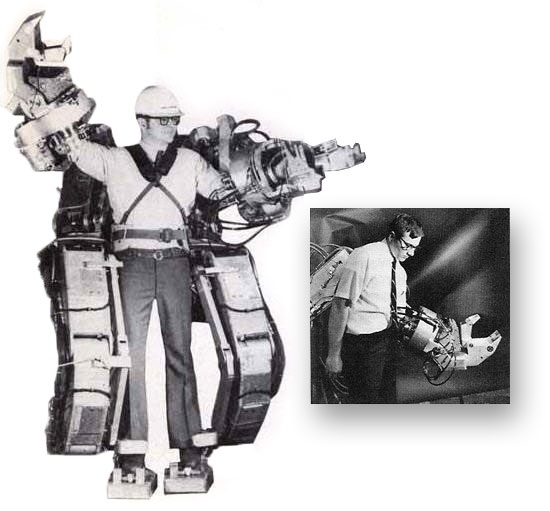 Ralph Mosher, an engineer working for General Electric in the 1950s, developed a robotic exoskeleton called Hardiman. The mechanical suit, consisting of powered arms and legs, could give him superhuman strength.

An arm wrestler’s dream!  The General Electric Hardiman was as close as science got to a cyborg during the ’60s; and even then, it was a stretch, since it was worn by its operator rather than grafted onto his body.

Hardiman was the first serious attempt to build a powered exoskeleton that could multiply the strength of the operator enough to allow him to lift 1500 lbs as if it was a packet of peanuts.  General Electric had high hopes for Hardiman; envisioning it being used aboard aircraft carriers for bomb loading, underwater construction, in nuclear power plants, and in outer space, but by 1970 only one arm was actually made to work.

It could lift 750 lbs and responded according to specs, but the thing weighed in at three quarters of a ton and any attempt to get  its legs to work resulted in a fit of mechanical St. Vitus Dance.  One arm does not an exoskelton make, so Hardiman faded off into development limbo.

Comments Off on GE’s Retro exoskeleton (robot) from the 1950s