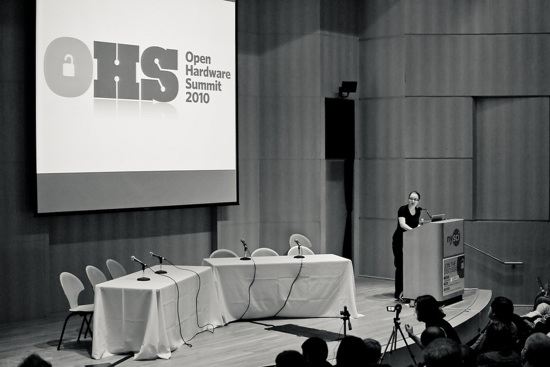 Last week, the New York Hall of Science played host to the Open Hardware Summit, a gathering that drew a diverse mix of people from academia, the art community, and companies ranging from startups to Texas Instruments. Open Hardware may not have had the success of its software cousin when it comes to acceptance and recognition, but there was a lot more going on in the community than I would have expected going in to the meeting, and a lot of different reasons the people present chose to go the Open Hardware route.

Over the course of the day, two basic rationales for going open became apparent. For the larger businesses, open hardware creates a business opportunity, as an open design can drive sales of their main products—even if a competitor takes a board design and runs with it, the company can still come out ahead if it means sales of related products. For smaller companies, the openness of hardware can mean sales to a community of hobbyists and hackers that’s much larger than most people realize.

Limor Fried of adafruit added two additional reasons that open hardware worked for her company despite the competition. The first was that, as a small shop, it’s been unable to keep some of its more popular products in stock at times—with the plans available, they end up with a few less dissatisfied customers. When the company’s documents help a hobbyist put something together themselves, it often creates a loyal customer.

But her closing thought was that imitation really was a form of flattery. They fact that someone felt a design was worth using really told her that her work was on the right track. “You know,” she said, “there are no Zune knockoffs for sale on Canal Street.”