Andre Sougarret: The Engineer Behind the Chilean Mine Rescue 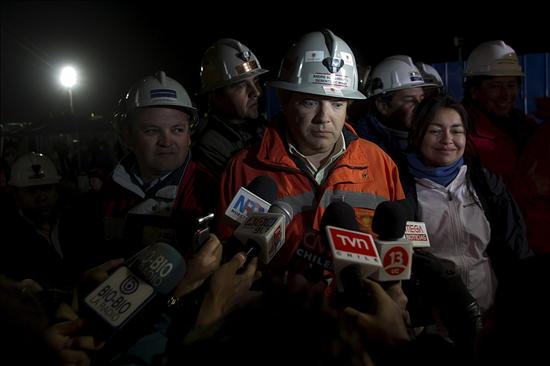 from the Associated Press:

Three days after 33 men were sealed deep within a gold mine, Andre Sougarret was summoned by Chile’s president.

The Chilean leader got right to the point: The square-jawed, straight-talking engineer would be in charge of digging them out.

At first Sougarret worried – no one knew if the miners were alive, and the pressure was on to reach them. And he knew he would be blamed if the men were found dead “because we didn’t reach them or the work was too slow.”

But eventually, contact was made, the work was on, and the miners below were calling him “boss.”

A methodical engineer who stays cool-headed under pressure, Sougarret said he tried not to dwell too much on the men he was trying to save.

“I never allowed myself to think about what was happening with them – that’s anxiety-causing,” he said. “I told myself, ‘My objective is to create an access, a connection. Put that in your head.'”

Like most people, I watched the rescue operation with a combination of apprehension and awe. Apprehension because something could go wrong and people could die. Awe because of the salient professionalism displayed by the rescue team at every level. All of that comes from great and capable leadership, as exemplified in Mr. Sougarret.

It’s rare that an engineer encounters a situation that tests their meddle the way something like this would. Much of the time, it’s the opposite: when an engineer does their job well, things like mine collapses or engine seizures or missile guidance malfunctions are minimized as much as possible.

Most engineering is preemptive and preventative — troubleshoot extensively before production and deployment, so you don’t have to do it on site later (or worse, get somebody hurt). Still, it’s this same attention to prevention (yes i know, it rhymes) that makes a good engineer an asset when something does go wrong and you have to fix it. Andre Sougarret and his team are good engineers.