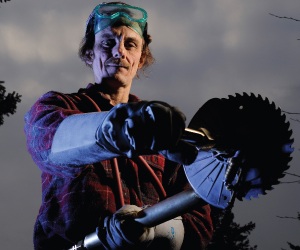 AMP UP THE SPOOKINESS QUOTIENT AT YOUR HOUSE THIS HALLOWEEN BY DONNING A LAB COAT, COLLECTING SOME PVC TUBING, LEDS, DIODES, AND RESISTORS, AND BUILDING THE GADGETS BELOW! EACH PROJECT INCLUDES A PARTS LIST (RUBBER SPIDERS, FAKE BLOOD AND VAMPIRE TEETH NOT INCLUDED), SCHEMATIC AND COMPLETE BUILD INSTRUCTIONS. HAPPY HAUNTING!

Dick Had a Cameo Role in Scream 2
Why putt golf balls into a paper cup when you can have your own variable-terrain putting green?

Spirit Radio Receives Transmissions from the Beyond
Rick Crammond’s Spirit Radio creates spooky sounds, paying homage to all things that go bump in the night.

Dick Worked the Graveyard Shift
When the local church needed storm effects for a skit, sound man Dick Neubert found the thunder on the Internet and added “lightning” with a photoflash strobe. In all, this common strobe design will deliver some very uncommon effects for your next Halloween spookfest.

Cutting Pumpkins the Tesla Way
Rick Crammond created a gadget for cutting Halloween pumpkins that is powered by the faucet in a kitchen sink. The water pressure drives a stack of CDs that has been converted into a turbine.

Bill Had That Weird Sensation He Was Being Watched
Partial to things that go bump in the night, Bill built a circuit that slowly illuminates and fades a pair of red LEDs. Install it in a skull as a Halloween prop or if spooky things aren’t your thing, use it as a fancy power indicator for a home appliance.

Comments Off on Spook-tacular projects…