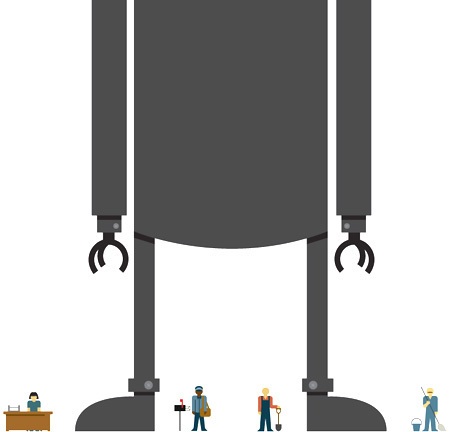 The culprit, in other words, is technology. The hard truth—and you don’t see it addressed in news reports—is that the middle class is disappearing in large part because technology is rendering middle-class skills obsolete.

People say America doesn’t make anything anymore, but that’s not true. With the exception of a few short lapses, manufacturing output has been on the rise since the 1980s. What is true is that industrial robots have been carrying ever more of the manufacturing burden on their steely shoulders since they appeared in the 1950s. Today, a Japanese company called Fanuc, Ltd., has industrial robots making other industrial robots in a “lights out” factory. (That’s the somewhat unsettling term for a fully automated production facility where you don’t need lights because you don’t need humans.) That’s where we’re headed.