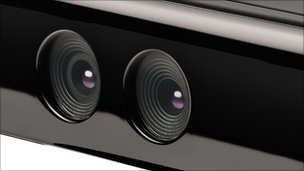 Code to control the motion-capture device has been produced that allows it to be used with a PC rather than the Xbox game console.
Those behind the hack are keen to use the device in schools, art projects and to aid human-robot interaction.

Microsoft has said it was not happy with the unofficial modifications made to the gadget’s control system.

The attempt to hack the control system for the Kinect gadget was kick-started by electronics kit maker Adafruit. On 4 November it announced it would pay $1,000 (£624) to the first person to produce control software, known as drivers, for the Kinect.

It upped the bounty to $3,000 (£1,871) following comment from Microsoft saying it did not condone the reverse-engineering of its motion controller.

The Adafruit bounty was won by hacker Hector Martin who was the first to produce drivers and make them available for others to download and improve.

We love the BBC!