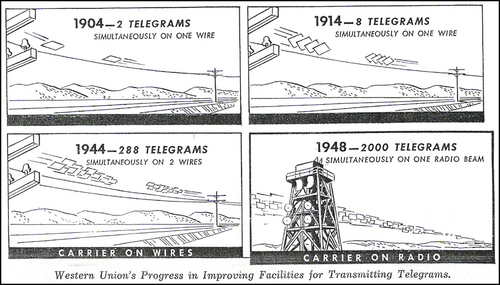 Western Union was one of the first to use radar-wavelength waves for telecommunication. From David Rotenstein’s blog:

In March 1945 the Federal Communications Commission (FCC) authorized the Western Union Telegraph Company to place into service an experimental microwave relay system between New York, New York and Philadelphia, Pennsylvania. The system to beam telegrams between stations used radio frequencies that had previously only been used by military radar systems.

The experimental system that used unattended stations placed at regular intervals to facility a line-of-sight radio relay allowed Western Union to refine the radio beam telegraphy process by improving its equipment to maintain constant signal strength. The equipment used in Western Union’s experiments was made by the Radio Corporation of America (RCA) under license to Western Union. The company’s goal was to develop a system that increased the capacity for sending telegraphs, to eliminate much of the company’s wireline reliance (i.e., make poles and wires obsolete) and to position it for providing transmission services for emerging television technology.

Western Union designed its system by incorporating two facility types: terminals and relay stations. In March 1945 the FCC authorized the Western Union to place into service an experimental microwave relay system between New York, New York and Philadelphia, Pennsylvania. This network linking New York and Philadelphia included terminals in Philadelphia and at the company’s New York City headquarters. Relays were planned at Bordentown, Ten Mile Run, and Woodbridge, New Jersey. The New York-Washington-Pittsburgh network incorporated the New York headquarters, a rooftop location in downtown Pittsburgh, and a new tower building for the Washington, D.C., terminal. Each terminal was connected by nodes in the network: unattended relay stations with towers and equipment buildings.