Soldering an Adafruit Motorshield with kids 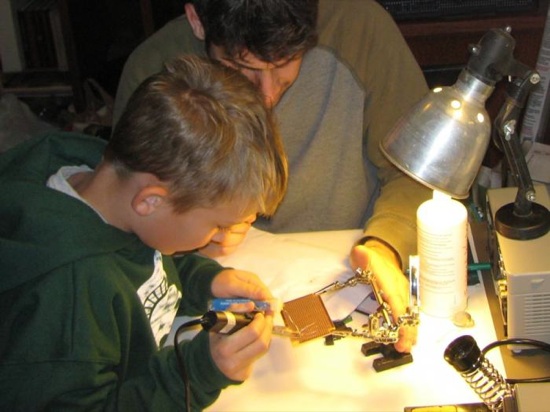 Soldering an Adafruit Motorshield with kids…

One of the projects that my oldest son and I have been (s l o o o o w l y) working on is a robot.  The first version was great since it helped introduce him to the concept of “iterations” (i.e. start small, tackle one or two “features” first, learn from what you do, make another version, repeat) and me to basic electronics.  Really, it wasn’t great–in fact it never even got to the point of moving, but we learned a lot.

For the 2nd iteration, we’re controlling it with an Arduino.  Part of that is made easier by using a motorshield sold by Adafruit.  Since I want my son to take as much control of this project as he can, I let him do all of the soldering–I did do a bit of desoldering, though, when we decided to make the shield stackable.

The whole experience was really fantastic, and by the end he became very proficient at soldering.

The kit has a lot of pieces to solder, so I’m not sure I would recommend it as a “first” experience with soldering.