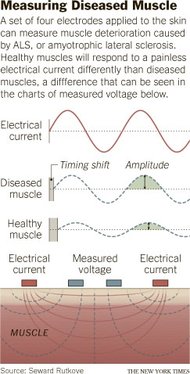 This is so cool! A group of scientists and engineers, led by Dr. Seward Rutkove, have found a way to use the electrical impedance of muscles as an indicator of neuromuscular degeneration, and to incorporate that measurement into a hand-held testing device. The approach won them the $1 million Prize4Life.

Dr. Merit Cudkowicz, a professor of neurology at Massachusetts General Hospital and a chairwoman of the Northeast A.L.S. Consortium, compared Dr. Rutkove’s discovery to the way magnetic resonance imaging expedited the development of drugs for multiple sclerosis.

“You can use this as a tool to screen drugs to see if they will affect survival,” she said, but added, “The ultimate prize is finding a drug that works for A.L.S.”

Dr. Rutkove, 46, who has been treating patients with neuromuscular disease for 16 years, took advantage of the way our muscle fibers change electrical currents. With a hand-held device hooked up to electrodes on the patient’s skin, a doctor can send a painless electrical current into a given muscle, then measure the voltage that results.

As A.L.S. spreads, motor neurons die off, causing muscles to atrophy. The deteriorating muscles behave differently from healthy ones, resisting the current more. In studies of humans as well as rats, Dr. Rutkove showed that these variations were closely correlated with disease progression and length of survival.

And more from IEEE Spectrum:

Impedance analysis–inferring tissue’s structural properties based on how electrical current flows through it–was, by and large, relegated to the food and nutrition industries. Rutkove got into the field in 1999 after reading a paper by two physicists who used electrical impedance to study human skeletal muscles. Perhaps the approach could help quantify the damage caused by neuromuscular diseases, such as ALS, he thought.

Within a few years, Rutkove was collaborating with those physicists and had partnered with Joel Dawson, an electrical engineer at MIT, to create a handheld electrical impedance system for clinical use. The method turned out to be a great way to chronicle neuromuscular deterioration: decreases in fat and muscle mass have different effects on resistance and capacitance, creating a disease state-specific electrical signature.

It’s strange, at first, to think that our bodies have resistive and reactive properties. Of course all matter does; we’re only atoms, after all. But I think it’s really neat that these characteristics, and the ability to measure them, can actually help doctors track (and hopefully prevent) devastating diseases like ALS.

Comments Off on Using Impedance Measurements to Track ALS