Girls and math and science… 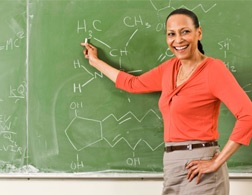 Stout, Dasgupta, and their colleagues wanted to find out why women’s outstanding performance on science and math tests in high school and college correlates so weakly with their eventual interest in pursuing careers in those fields. In high school and college, girls increasingly earn math and science grades equal to or better than the grades of their male peers. But when it comes to choosing a career in math or science, more men than women choose to walk through those open doors.

Our experience: When young girls see female engineers & scientists they’ll say it’s something they want to be when they grow up, if they don’t see them – it’s doesn’t seem like an option.

Comments Off on Girls and math and science…