“If membership… is restricted to men, the loss will be ours” 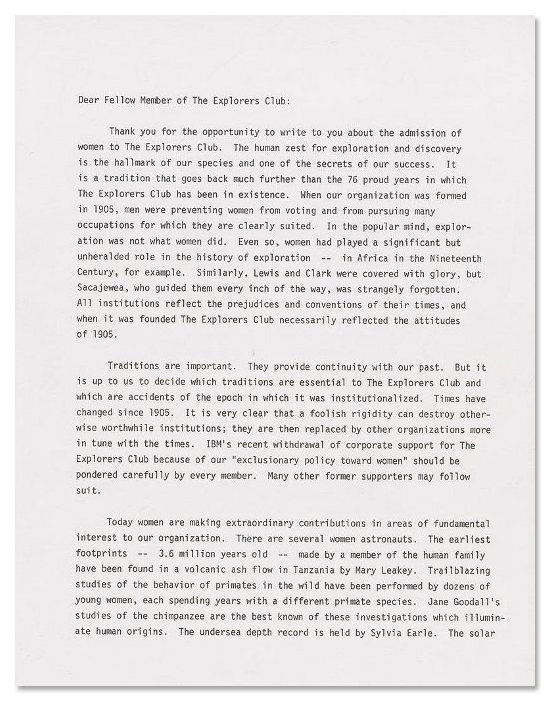 This fascinating letter from Carl Sagan to The Explorers Club, regarding their men-only membership policy. From the Letters of Note blog:

Early-1981, following IBM’s withdrawal of support due to the organisation’s continued exclusion of women within its ranks, renowned astronomer Carl Sagan sent the following impassioned letter to each and every fellow member of The Explorers Club — an international society dedicated to scientific exploration since its inception in 1904 — and argued beautifully for a change of policy.

The following wonderful paragraph appeared on the second page of the letter (the first page is shown above):

Today women are making extraordinary contributions in areas of fundamental interest to our organization. There are several women astronauts. The earliest footprints — 3.6 million years old — made by a member of the human family have been found in a volcanic ash flow in Tanzania by Mary Leakey. Trailblazing studies of the behavior of primates in the wild have been performed by dozens of young women, each spending years with a different primate species. Jane Goodall’s studies of the chimpanzee are the best known of the investigations which illuminate human origins. The undersea depth record is held by Sylvia Earle. The solar wind was first measured in situ by Marcia Neugebauer, using the Mariner 2 spacecraft. The first active volcanos beyond the Earth were discovered on the Jovian moon Io by Linda Morabito, using the Voyager 1 spacecraft. These examples of modern exploration and discovery could be multiplied a hundredfold. They are of true historical significance. If membership in The Explorers Club is restricted to men, the loss will be ours; we will only be depriving ourselves.

Filed under: ald, random — by johngineer