Automation Comes to the Harmonica… 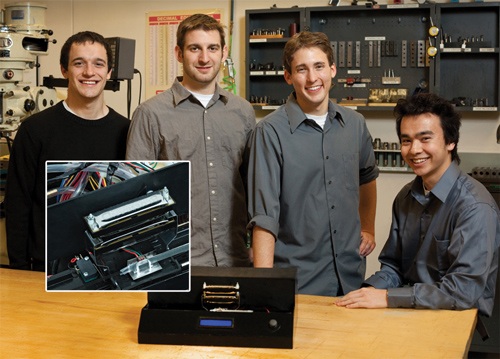 This device plays programmed songs by delivering and controlling airflow through two standard “C” harmonicas. Two harmonicas are used to produce draw and blow notes while only using compressed air, no vacuum. This is achieved by flipping the reeds in one of the harmonicas. The Electronic Smart Harp or E-Sharp can play a myriad of simple harmonica tunes to entertain guests. A hobbyist could be further entertained by creating an actuated diffuser to play more than one note at a time, or by developing a diaphragm to adjust the air volume per note.

When the device is switched on, start up tune plays, and the LCD will display the name of the project, as well as the developer’s names, followed by a prompt to select a song. Movement of the joystick will toggle between the available songs, and depressing the joystick will select that particular song. A master PIC receives this user input, and communicates with the LCD PIC to find the song. The master PIC will also send a signal to the position and airflow controlling PIC (slave PIC) to play the selected song. This PIC also controls two electronic solenoids, which when activated, open the valve and supply enough air to vibrate the harmonica’s reeds. These valves are connected to tubes that lead to each harmonica. The slave PIC can either send a “blow” command (forward air movement through a standard harmonica) or a “draw” command (forward airflow through a harmonica with reversed reeds.) The air is supplied via a compressor that is externally attached to the device. It was found that the tank should be around 25 psi to provide optimal airflow.