Great Interview with our friend Akiba on MAKE 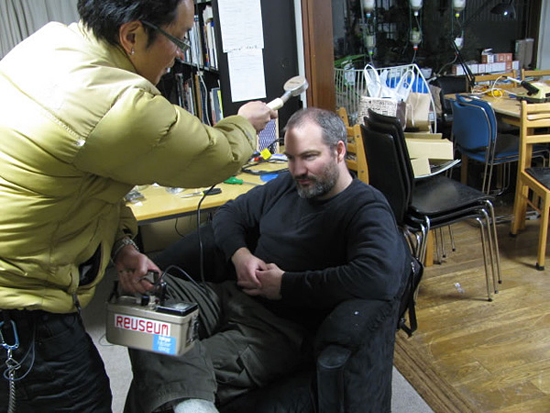 John Baichtal has done a terrific interview with our friend Akiba (freaklabs) over on the MAKE blog. Among the topics discussed were the Earthquake and Tsunami and their aftermath, and how the Tokyo Hackerspace began to mobilize in order to help:

JB: How did you get other hackerspace members involved?

A: At the Tuesday hackerspace meeting after the earthquake, things were very tense. We had to figure out what needed to be done and we just put together a list. After that, we jumped on whichever project we thought we could be most effective in. Once we had the list going, we got to work on it and afterwards figured out what the priorities were. But the important thing was that we had to take some kind of action. Sitting around was the worst thing we could do because then you just get stuck in all the armageddon news that was being floated around.

Once we got the projects going, people would spontaneously jump on them. For the geiger project, we had multiple volunteers saying they’d donate time on the software side. A few days later, SEEED studio let us know there was a collaborative project for OSHW geiger counters. After that, Pachube informed us that they were upgrading the accounts of people making radiation-related feeds in Japan, allowing us to have a large amount of feeds and unlimited history. Things just started working out and evolved with the situation.

The long range WiFi project also had multiple volunteering time and effort. We had a workday and we configured routers in repeater mode and tested out high gain directional antennas. One of the members set up an Asterisk server so we could test out VoIP data. We had a conference call with one of the member’s wife who was a survivor of the Kobe earthquake. She said that it was a great effort but when she was in that situation, what mattered were immediate needs. Based on her feedback, we decided to postpone the long range WiFi project for the time being to focus on whatever we could get out immediately.

Lauren started the Tohoku Smiles project with the art supplies for kids. She’s heavily involved with the Democrats Abroad community in Asia and solicited a lot of donations from them for the supplies. This project is also on hold temporarily though to focus on immediate needs.

Chris Harrington started up a shelter in Kamogawa. He was part of our rice farm sensor network project and also started a farm out there. He’s an active member of the local community and they’ve been trying to decide what to do with an abandoned public school.

The lantern project took on a life of its own. We had lots of hackerspaces offering help to assemble them, sending us parts, and also sending us donations for it. We also have lots of volunteers in Tokyo to help us with the assembly.

So as you can see, all of the projects were independently started and basically originated spontaneously. They’re also evolving spontaneously. Eventually, more organization will be built in, but its beautiful to see something like this.

It’s really neat to see how the hackerspace model responds in a situation like this. I think the hackerspace idea — independent, creative individuals working on their own but within common organization and sharing resources — really works well in such endeavors. Being smaller, such a group can respond more quickly and adapt better to what is going on, without losing cohesion.

It’s great to see all the amazing work Akiba and the Tokyo Hackerspace has done — here’s wishing them best of luck in the future as well!

Comments Off on Great Interview with our friend Akiba on MAKE