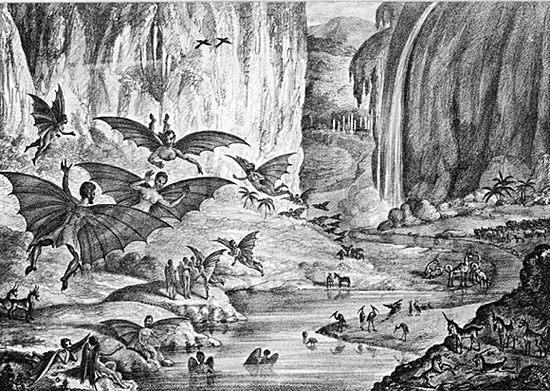 Many of us are still enamored with the April 1st shenanigans of a few days ago, some of which began as a joke, but have since become reality. In the recent words of William Gibson: “April Fools is Halloween for the Internet.”

But lo, long before the Internet became the place to play pranks on the unsuspecting masses, there were trusted newspapers which did the exact same thing. Consider, if you will, the New York Sun, and the serial fraud perpetrated therein:

Say the words “Moon Hoax” these days, and everyone thinks you are talking about the people who don’t believe the Apollo astronauts ever went to the Moon. But back in 1835 there was the original Moon hoax that thousands of people fell for, despite the tall tale being complete fiction. A series of articles were published in the New York Sun newspaper reporting incredible new astronomical observations of the Moon supposedly made by astronomer Sir John Herschel during an observing run at the Cape of Good Hope with his powerful new telescope. Detailed descriptions of winged beings, plants, animals and a sapphire temple increased sales and subscriptions to the fledgling newspaper.

Here’s a selection from one of the articles:

“We counted three parties of these creatures, of twelve, nine and fifteen in each, walking erect towards a small wood… Certainly they were like human beings, for their wings had now disappeared and their attitude in walking was both erect and dignified… About half of the first party had passed beyond our canvas; but of all the others we had perfectly distinct and deliberate view. They averaged four feet in height, were covered, except on the face, with short and glossy copper-colored hair, and had wings composed of a thin membrane, without hair, lying snugly upon their backs from the top of the shoulders to the calves of their legs.”