Researchers explain why bicycles balance themselves 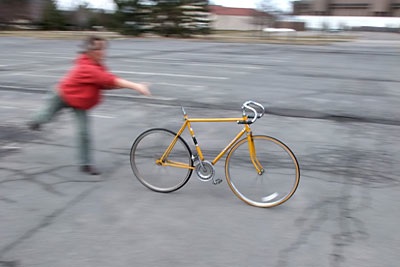 Researchers explain why bicycles balance themselves…

The 1949 movie “Jour de Fete” shows a postman frantically chasing his bicycle, which rides away on its own. It could happen. Many bicycles, even without a rider, naturally resist tipping over if they are going fast enough. Scientists and engineers have been trying to explain bicycle self-stability ever since the 19th century. Now, a new analysis says the commonly accepted explanations are at least partly wrong. The accepted view: Bicycles are stable because of the gyroscopic effect of the spinning front wheel or because the front wheel “trails” behind the steering axis, or both.