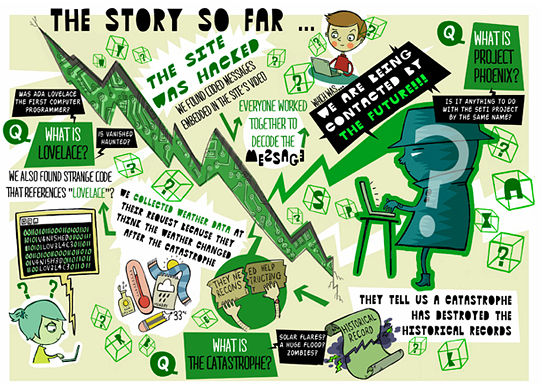 Researchers at MIT have created a game called “Vanished”, which seeks to provide a neat story arc in which kids can learn about the world around them, solve science problems, and collaborate, submit and share data. From Fast Company:

“As game designers,” MIT’s Scot Osterweil says, “we’re convinced that game playing is a lot like science: There is problem-solving, exploration, collaboration, hypothesizing, testing and learning from your failures.”

Osterweil, research director of MIT’s Education Arcade, is one of the masterminds behind a new science game made for the Smithsonian Institution. The game is a National Science Foundation-funded experiment in “alternative science education.”

The game will last for two months, and unfolds like a narrative. (Osterweil promises “surprising plot twists” ahead–take that, 9th-grade chem lab!) MIT describes the overarching conception of the game this way:

“The premise is that people living in the future have contacted us in the present, to answer a question: What event occurred between our time and theirs that led to the loss of civilization’s historical records? Students must decode clues in hidden messages, and in response find and provide information about Earth’s current condition, such as temperature and species data, to help people in the future deduce what wound up happening.”

You can check out the game here. While it’s designed for kids, adults can play it too, though they cannot post in the forums. Having looked around on the site, I have to say that it seems really well done. It has an interesting premise and a mysterious and thoughtful plot that should keep kids interested. In addition, it contains clues and references to real-life Smithsonian-affiliated museums. Players can go there to find clues, and they can share them with other kids in the game forums.

Finally, it features a rogue computer system called “Lovelace”, which makes it double-awesome. 🙂