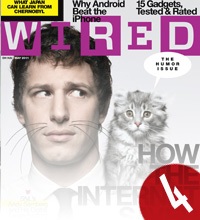 Congrats to our friends at Wired for their spot in the “Top magazines of 2011” we were thrilled to be part of it this year and the all the advertisers in the DIY issue were fantastic!

Icon of the dot-com boom, Wired escaped the fate of the other tech magazines of the go-go ‘90s by embracing a broader editorial mission. Under the patronage of Condé Nast, which bought it in 1998, and editor Chris Anderson, Wired has become an agenda setter and a digital beacon for the company. Though it took a beating during the recession, Wired’s ad pages soared last year—up 24 percent—earning the wonky title new respect in a publishing house of fashion glossies.

Comments Off on Top magazines of 2011