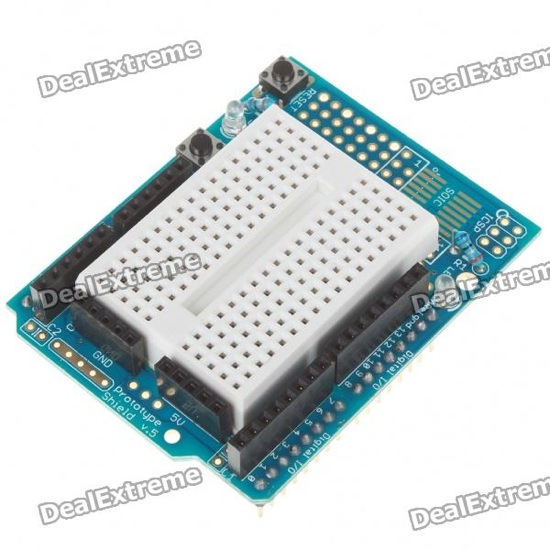 No big surprise, like some random eBay sellers, Dealextreme is also selling a cloned version of our prototype shield. They removed our name but left the version number – normally this is ok, it’s open source hardware. We’ve only asked they credit our design somewhere (Made available under CC 2.5 Share-Alike/Attrib.). Over the last week we sent them 4 requests to credit our design on their page and as expected they have not. They request you send emails to [email protected] – it just goes to nowhere. When we called they had no idea who we could talk to about updating their page or who actually is making the cloned shield(s). Dealextreme likely gets these from a nameless seller and they’re just getting boards to sell (oddly enough they’re using text from someone else’s site on their page).

We’re not going to link to their page (and please don’t post a link to them in our comments or elsewhere) – it’s not helpful.

This is an example of what can happen when you release open source hardware. People always ask us “what happens if I get cloned” – so here ya go, this is what happens when you are cloned. The quality is poor and the support is non-existent – someone who bought one emailed us and said the pads “fall off”. This doesn’t affect our business, but we’d like to see DealExtreme and the cloners follow the very simple request of crediting our design. DealExtreme is known as a shady source for all sorts of things, from counterfeit iPods and accessories to cell phone jammers, no one can stop them – not Apple, not the US gov. We do not expect them to credit OSHW either.