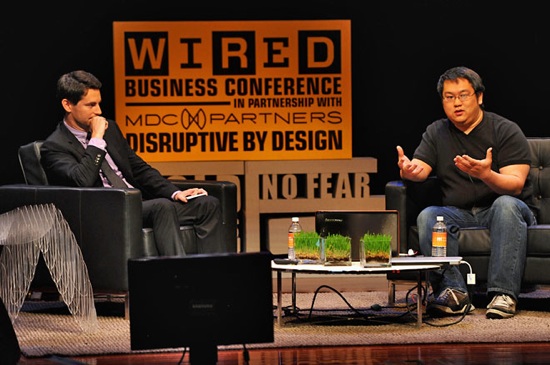 NEW YORK — Six months ago Tuesday, computer scientist Johnny Chung Lee secretly birthed a robust hacking community around the Kinect game controller by Microsoft.
‘This is showing us the future. This is happening today, and this is happening tomorrow.’

On Tuesday, Lee updated an audience on crowdsourced efforts to repurpose the Kinect at the Wired Business Conference: Disruptive by Design. Lee now works for Google as a “rapid evaluator,” but was a key designer behind the controller-free interface for the Xbox 360.

“It’s a special type of camera that not only gives you a color per pixel, but also gives you a distance to each pixel,” Lee said. “As a result you get this 3-D sand-like environment.”

When Kinect is used with the Xbox 360 the console figures out where people’s hands, feet and other body parts are in the pixels and treats them as controllers. But before Kinect even came out, hackers foamed at the mouth to reverse-engineer and control the device to their hearts’ desires.

Lee earned accolades for hacking Nintendo’s Wii’s controller, so he tried to work with Microsoft to free the source code on some basic level. It didn’t work out, bringing Lee to secretly work with do-it-yourself giant Adafruit Industries to start the Open Kinect contest to build the device’s drivers from scratch. Hacker Héctor Martin claimed the $3,000 bounty in less than a week.