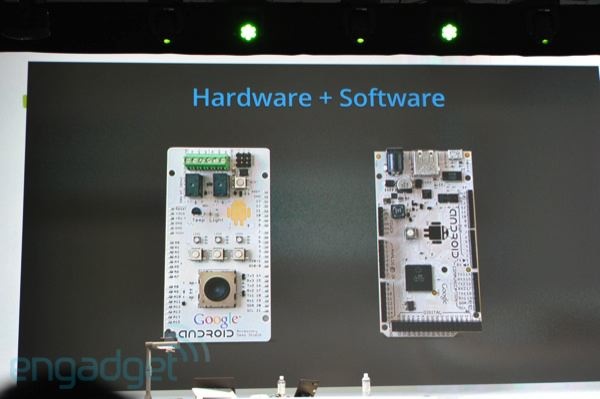 In this post-PC world, tablets and phones are starting to be our main devices. But what if we want to do something special with like like adding keyboards, mice, and game controllers. Google is working on a new project called the Android Open Accessory toolkit that will allow designers to use open source hardware interfaces like Arduino to connect multiple input devices to almost any Android system.

The Arduino boards will act as reference designs for manufacturers to base their future systems on and will not appear in most finished products. However, because Google is using Arduino, hobbyists and tinkerers can connect to Android devices with a bit of coding.

The first cool implementation comes with Android@Home, a system for controlling LED lights from an Android device. This unique – and fairly exciting system – will appear at the end of the year.

The program is completely open with no NDAs, fees, or approval process.

It’s like “made for iPod” but it’s Arduino and it’s open. This will obviously increase the amount of folks interested in Arduino 🙂 For some reason we usually are asked (by arduino skeptics) “when will Arduino go mainstream” ? – this might just be another data point to support more mainstreamy-ness.

A USB micro-controller board that is based on the Arduino Mega2560 and Circuits@Home USB Host Shield designs (now referred to as the ADK board), which you will later implement as an Android USB accessory. The ADK board provides input and output pins that you can implement through the use of attachments called “shields.” Custom firmware, written in C++, is installed on the board to define the board’s functionality and interaction with the attached shield and Android-powered device. The hardware design files for the board are located in hardware/ directory.

Not sure where to buy the hardware yet (?).