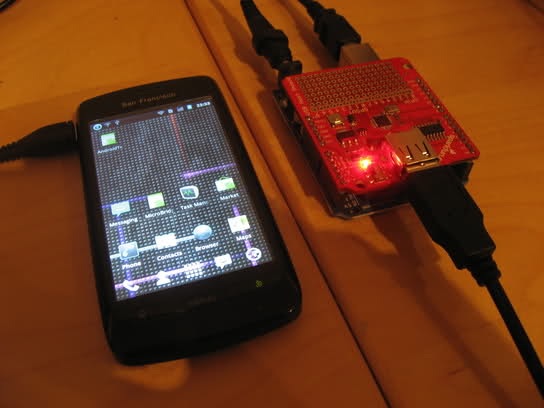 Google’s open accessory development kit on standard Arduino hardware, not confirmed but seems like it should work…

A lot of people have been put off by the price of the reference hardware kit, which is roughly $390. What’s worse, they appear to be sold out until end of May, and Microchip’s cheaper ($80) alternative doesn’t arrive until July. So instead of waiting I decided to write a guide on how to get an ADK-capable Arduino for about $55.

Since the ADK reference design is based on Arduino and Oleg Mazurov’s excellent USB host shield, it stands to reason that we should be able to build our own hardware kit from these components. I already had these parts lying around from my work on MicroBridge, so I decided to ‘port’ their code, which in reality means just changing a couple of pin definitions.