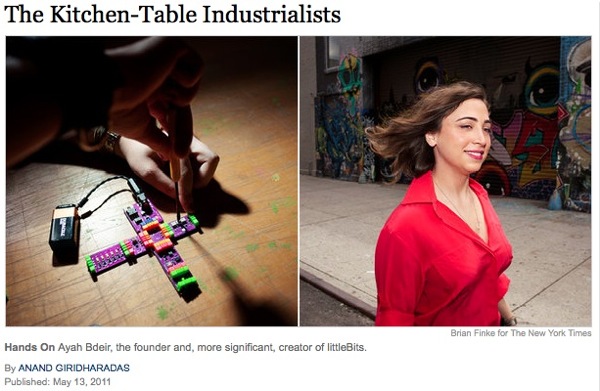 The Kitchen-Table Industrialists @ NYTimes.com. A version of this article will appear in print on May 15, 2011, on page MM50 of the Sunday Magazine with the headline: Meet The Makers.

Adafruit also illustrates how a good part of this new manufacturing operates through open-source sharing and what can be called social tinkering, in contrast with the manufacturing of the past, which emphasized patents, trade secrets and proprietary invention. Fried got the idea for such a company when, as a graduate student at the M.I.T. Media Lab, she began making simple MP3 players and cellphone jammers, just for nerdy kicks, and made the recipes for her creations — CAD files, software, mechanical drawings — public on her blog. Requests poured in for kits that would allow people to make what she designed, and Adafruit was born.

Today Adafruit remains an open-source company. It publicizes how its kits are made, so that you can clone them, and also reveals how it runs as a business. The company says which Internet service provider it uses, which shipping company, which software runs its online shopping system. Torrone told me that they share this information so that other companies, including rivals, can cut to the chase of genuine discovery and not get bogged down reinventing wheels.

Comments Off on The Kitchen-Table Industrialists @ NYTimes.com