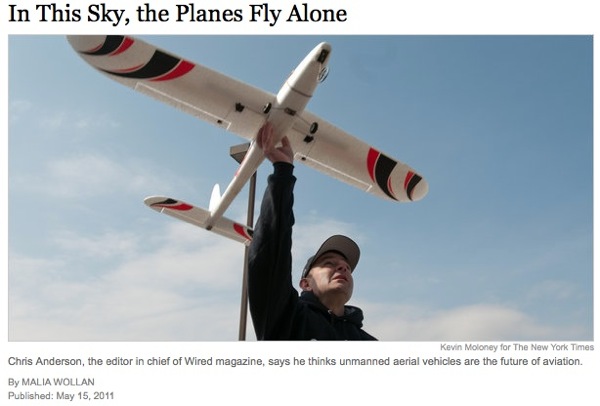 A father of five and a professed geek, Chris Anderson, editor in chief of Wired magazine, is always looking for child-friendly activities that could, he hopes, inculcate his children with techie sensibilities.

So one weekend in 2007, Mr. Anderson brought home a model radio-controlled airplane and a Lego Mindstorms robotics kit. Soon he and the children put the two toys together, making the Lego robot fly the plane. The result was a clunky Lego drone.

His children moved on to other playthings. But Mr. Anderson was captivated. And that led him to found an online network for amateur drone enthusiasts, DIY Drones, and to co-found a new business, 3D Robotics, which features an online store for those hobbyists.

“This is the future of aviation,” Mr. Anderson, 49, said. “Our children will not believe that people used to drive cars and drive airplanes. We are the weak link in the chain.”