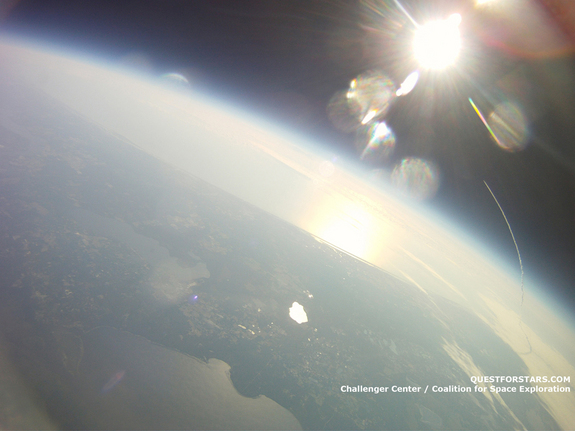 The final voyage of the Space Shuttle Endeavour was caught on camera by a student-built high-altitude balloon that was launched earlier in the day. From space.com:

The balloon was built and flown by students as part of a venture conducted by Quest for Stars, a non-profit educational organization, in coordination with the Challenger Center for Space Science Education and the Coalition for Space Exploration.

The intent of the balloon flight is to bring together students and citizens from across a broad range of backgrounds who would not normally have contact with a mission to the edge of space, organization officials said in a statement.

The payload of this balloon, Senatobia-1, takes its name from the city of Senatobia, Miss., which has long shared a special connection with Endeavour. Senatobia was one of two communities that originally suggested the name “Endeavour” as a possible name for NASA’s youngest space shuttle, which was built as a replacement after Challenger was tragically lost in 1986.

In addition to carrying a still and video camera, a GPS and radio tracking devices, the balloon also toted signatures gathered from a large number of students in Senatobia wishing a speedy recovery for wounded Congresswoman Gabrielle Giffords, wife of Endeavour’s STS-134 commander Mark Kelly. Giffords (D-Ariz.) suffered a gunshot wound to the head in a failed assassination attempt at a January constituent meeting in Tucson.

The balloon burst at high altitude and drifted back down to Earth as planned today, its mission complete. Recovery personnel grabbed it and reported that everything had apparently worked well.