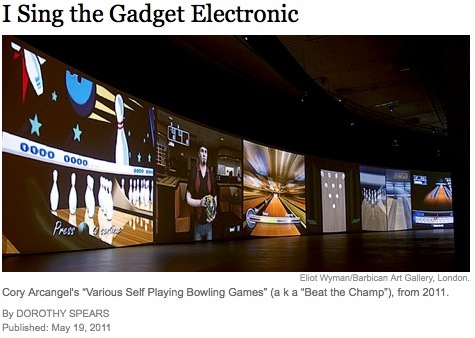 ON a rainy April morning in what looked more like a makeshift office than an art studio, Cory Arcangel was deciding what drawings to produce for his survey show “Cory Arcangel: Pro Tools,” which opens Thursday at the Whitney Museum of American Art. Of two possible contenders, one would present the lyrics of the Miley Cyrus song “Party in the U.S.A.” in playful, loopy lettering; the other would be an intricately rendered tree. Both images would feature delicate lines laid down by a steady hand, though not Mr. Arcangel’s: the drawings would in fact be the product of a 1990s pen plotter machine, until recently defunct, which Mr. Arcangel had rerigged and reprogrammed.

Comments Off on Cory Arcangel’s Video Games at the Whitney