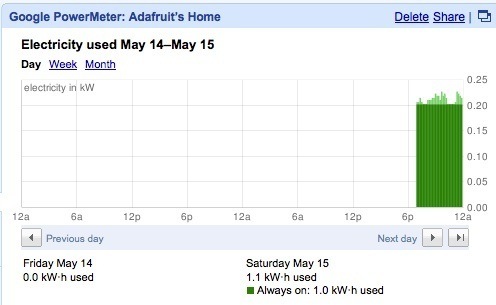 The Google Power Meter API has been officially deprecated as of May 26, 2011 to reflect that it’s no longer undergoing active development and experimentation, which is the hallmark of APIs in the Code Labs program. However, we have no current plans to remove functionality for existing users.

Google stopped updating their Power meter blog last year (Aug 31, 2010). For the power geeks, you can read our long history with Google’s power metering efforts / competition here. We think it’s an excellent case study for someone out there and a cautionary tale of what happens when Google gets in your market.

Here’s what we predicted July of last year…

At this point, and just our opinion, we’re not really sure PowerMeter is a serious effort at Google and if it will continue, the manager (Ed Lu) recently left, the forums are pretty low volume on the Google site and if you review the Tweet-a-Watt time line it’s not that encouraging for folks wanting to use Google PowerMeter. The folks from Google have posted here before and we’re hoping they re-consider how they’re deploying PowerMeters and what the goal of the project really is…

We got our Tweet-a-watt to work with the Google Power meter API for kicks despite Google ignoring the requests for access from the open source / open hardware community, Google chose only to work with commercial partners and not the thousands of Tweet-a-watt makers out there. It was mostly a war of the press releases as Google didn’t really do much in this space, only making sure other companies in the power metering arena stayed scared of Google, it worked. Google does a lot of cool things, but sometimes they get “grabby” in markets, freak people out, buy a bunch of stuff/people and then just kill off stuff it seems. Happens to lots of companies, Google is working on self-driving cars now.

All that said, we’re excited by the recent developments with Anrdroid + Arduino, mostly because it’s all OSHW and it will continue no matter who or what happens. If you want to build open source power meters, we’ve got you covered, always 🙂